Building a Post Binder for a 19th Century Sewing Book 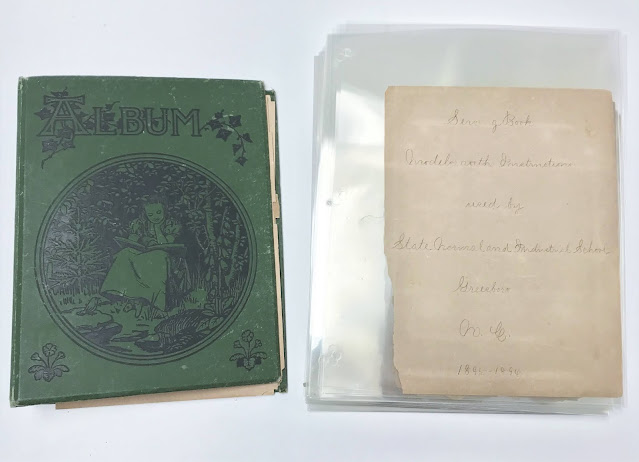 State Normal and Industrial School (now UNC Greensboro) once offered sewing classes for the young women attending the school. Along with preparing students to be teachers, the school's Domestic Science Department was also concerned with fostering the skills necessary for women to become good wives and mothers. No doubt sewing could be a useful skill to have during the early 20th century. The Martha Blakeney Hodges Special Collections and University Archives (SCUA) is fortunate to have three of these sewing books created by students in the late 19th century.

The three sewing books were delivered to Preservation Services so that we might devise a way to keep the pages as intact as possible while also stabilizing them. The goal is for these books to be used with classes visiting SCUA. Unfortunately, the substrate pages of the albums are quite discolored and brittle due to the acidity of the paper. Nonetheless, the sewing samples are incredibly intricate and interesting, especially considering they were all sewn by hand. Though there was not much we could do in house about the condition of the substrate pages, we were able to create post binders to better protect them. We also elected to leave the metal fasteners and pins that were securing the sewing samples to the pages because the pages were too brittle to remove them.Often, paper manufactured in the late 19th and early 20th century was created from wood pulp. The lignin, an organic substance that makes the cell walls in plants rigid or woody, in wood pulp contains acid that degrades the paper over time. You may have heard of the “Brittle Book Era”, which refers to this time period when paper manufacturers were under pressure to create a large quantity of paper very cheaply in order to meet the demand of the publishing industry. The wood pulp was cheaper to process into paper but resulted in very brittle paper over time. When brittle paper is torn, or more accurately “broken”, it is difficult to mend as the mend ends up being stronger than the paper being repaired and it simply breaks again along the edge of the mend. There are processes for deacidifying paper, such as washing it to remove some of the impurities and adjust the pH to a more neutral level, or spraying it with an alkaline solution to slow down the process of aging. However, there are often conservation solutions that simply are not feasible for us due to the cost or labor involved. Thus, creating post binders was the right solution for us at this time.The sewing books’ pages were already loose and simply resting inside the sewing album covers, so disbinding was not necessary. The first step of stabilizing the pages was to put each page in a protective Mylar sleeve. This type of sleeve is often referred to as an L-sleeve because the edges are sealed along two sides in an L shape. They serve as a protective barrier both for the item inside the sleeve as well as anything it might come into contact with, such as neighboring sewing samples in this case. Once all the pages were sleeved, the next step was to drill holes near the spine edge so that the posts could be inserted through the covers and the block of pages. However, due to the thickness of the sewing samples, spacers were needed at the spine edge between some of the pages or else the spine would be much narrower than the pages which would result in a wedge shaped book that bulges open at the fore edge. Spacers of museum board (similar to mat board)  were cut to the height of the text block and drilled with a drill press (see pictures). The Mylar pages were also drilled based on the same template so that the holes will align when the binder is assembled. Custom covers were made in three pieces - a spine piece and two covers. The covers also had to be drilled. Once all the parts were prepared, the post binding was actually quite simple to assemble. The screw posts come in a variety of lengths so they can be fit to any thickness of textblock.Though it is common to have an extra allowance of space on the spine edge of the Mylar so that the pages can turn, these sleeves were left even larger so that the sewing book pages would not have to flex as much. The original stamped cover designs of the sewing books were removed and adhered to the front of the new post binders. Because the sleeves are not sealed along the top edge at the head of each book, custom-fitted clamshells were later built to house the binders to prevent them from collecting dust.The post binders are a versatile option for protecting the pages of a book. In this case, they may not be the perfect solution, but they have succeeded in stabilizing the pages and making them a bit safer to handle with a class of students. Ultimately, that is usually our goal - to preserve items for use with researchers, classes of students, and perhaps in exhibitions.
at 7:30 AM No comments:
Email ThisBlogThis!Share to TwitterShare to FacebookShare to Pinterest
Labels: 19th century sewing class, book conservation, Martha Blakeney Hodges Special Collections, SCUA, sewing book, sewing models, State Normal and Industrial School, UNCG Libraries, UNCG Preservation
Older Posts Home
Subscribe to: Posts (Atom)

A behind the scenes look at some of the work we do in the Preservation Services Department of Walter Clinton Jackson Library at University of North Carolina at Greensboro. The Jackson Library collection encompasses over two million items including books, reference materials, periodicals, journals, maps, documents, university archives, special collections and a beloved, elderly doughnut.