Lois Morrison, an artist specializing in cloth-wood artifacts and quilts, was born of missionary parents on February 1, 1934 in Zaire, once known as the Belgian Congo. Until she was 18, they travelled back and forth between there and Richmond, Virginia. She completed her BA degree at Mary Baldwin College, Staunton, Virginia. She went on to graduate work (1956-1963) at Indiana University, Bloomington, Indiana. In 1965, she took her MFA degree from Virginia Commonwealth University, Richmond, Virginia.  She returned to Mary Baldwin College as assistant Professor and taught there until she moved to Leonia, New Jersey in 1970. Morrison has conducted workshops, shown her work around the world and enjoys her travels to places near and far.

Her imaginative, contemplative, whimsical books are held in the collections of distinguished institutions such as Tate Gallery, London; The Cooper-Hewitt Museum, New York; and The Museum of Modern Art, San Francisco, Victoria and Albert Museum in London, the Getty Museum in Los Angeles, California, Yale University Library and the Chicago Art Institute, among others.

Morrison's work began with fabric, first with quilting then fabric books. In the 1980’s, a fortuitous request from a friend to “make me a book” led her on the journey to what has become a passion. She stated that “all work dwindled for this”. Twice a year she finishes a fabric book, making two - one for herself and one for sale. Later she began making paper books as a way of making her work more accessible since she can make an edition of 25. For these she uses a Gocco printer – a simple Japanese screen-based object that makes either postcard-sized prints or exactly double that.  Most of her books have a movable three-dimensional aspect.  She states that reading was her earliest joy, so to make books with her own hands – working with text, illustration, and form – is making her end game a joy – dreams made concrete. 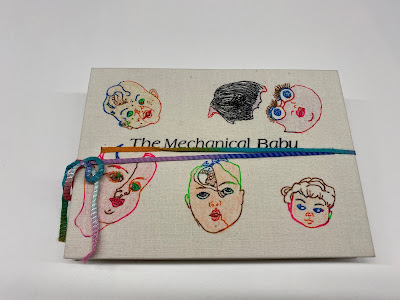 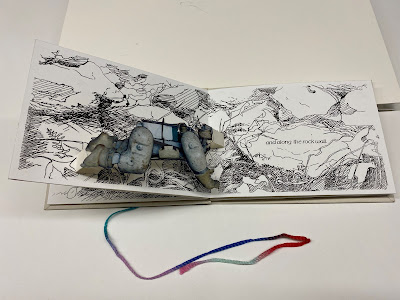 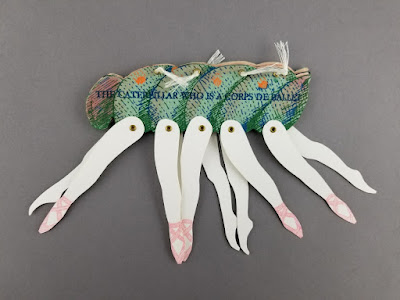 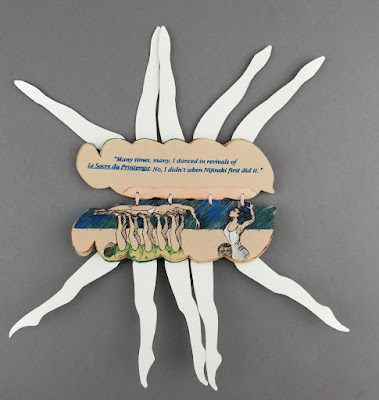 The Caterpillar Who Is a Corps De Ballet, 1994

These works pictured above are held in the collection of Special Collections and University Archives, UNCG

Lois Morrison has collaborated with Julie Chen and Flying fish Press on many artistic creations.  They have been friends for over forty years, having met when Julie Chen was a teenager, dating Lois Morrison’s son. Chen stated that she was introduced to the world of art when she met Lois Morrison.  Visiting her home and surrounded by the art Morrison both created and housed as well as finding stacks of art magazines she was able to peruse, was eye-opening and inspirational. 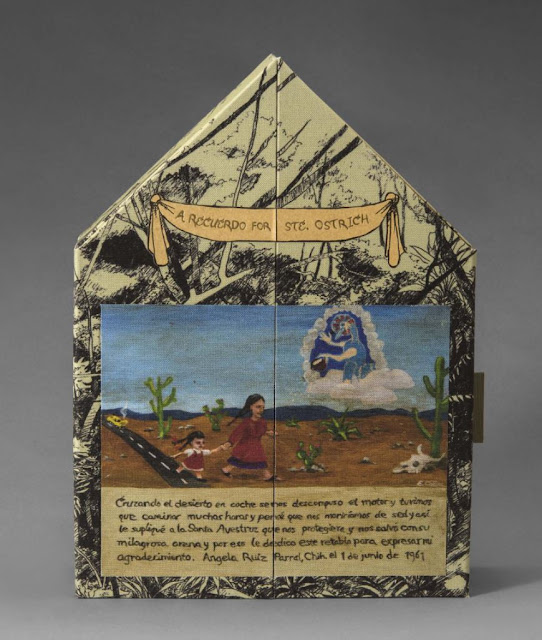 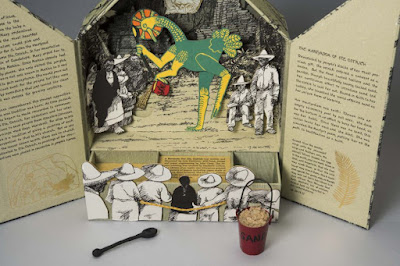 A Recuerdo for Ste. Ostrich, 2017. - Lois Morrison and Julie Chen, held in the collection of
Special Collections and University Archives, UNCG

Their friendship and mutual respect for one another has led to several beautiful, unique and fascinating collaborations, two of which include Ste. Ostrich in Manhattan: The Visitations of a Martyr and this most recent work - A Recuerdo for Ste. Ostrich. Published in 2017, 27 years after the publication of Ste Ostrich in Manhattan, this book follows the fictional character of Ste Ostrich to Mexico, where "she continues to bestow her special blessing of sand on the bemused locals". Presented in the form of a house-shaped altar, complete with a movable Ste. Ostrich and a drawer containing miniature versions of her long-handled spoon and bucket of sand. Letterpress printed using photopolymer plates made from pen and ink drawings by Lois. The papers are handmade by Papeterie Saint-Armand in Montreal, Canada. The box has a magnetic closure and is covered with custom-printed book cloth designed by Lois. Morrison has used the Artist Book Ideation Cards developed by Julie Chen and Barbara Tetenbaum to initiate her creative thought process. For example, using the cards, Morrison’s color card directed her to use her ‘favorite color.’ Yellow became the defining theme for the resulting book Deep in the Yellow Woods, which contained characters from other Morrison works, but she says she did introduce a new character - the yellow dog. She then printed the book on three different shades of yellow paper with imagery of her yellow goat, featured in previous works and inspired by an old comic strip, 'The yellow kid.’ 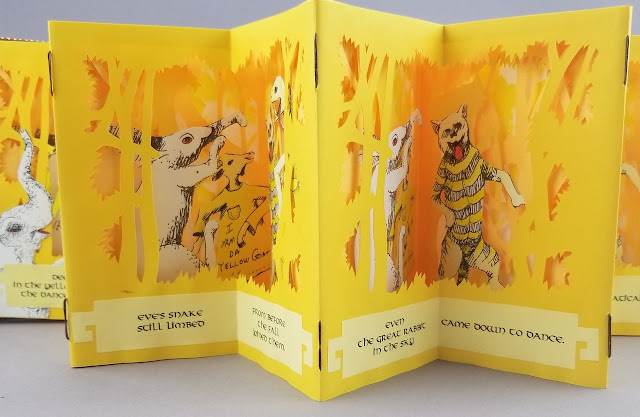 Morrison works in fabric and paper, but she also makes use of and is inspired by all sorts of objects she has found and salvaged which make delightful or sometimes foreboding appearances in her work—broken dolls, turkey feet discovered at a street market in Mexico, x-rays, small rocks, dead insects, pieces of metal, and, of course, bones. Morrison’s works are amusing, delightful, thought-provoking, and always highly engaging.

Each time I encounter work by Lois Morrison, I gratefully stop whatever I am doing, to sit and become immersed in the thoughts and creative vision she is conveying in the piece. I recently discovered the wonderful work in our collection - Spring in the Cabin. I opened the small box, and lifted out the handmade book, and in doing so, quite a number and variety of replicated dead insects fell onto the table. I couldn't help but laugh out loud. This work speaks of the discovery each year of the tiny carcasses found on windowsills and floors, the furtive and trapped little lives that succumbed to death. In the final thoughts of the book, the artist expressed her gratitude for these creatures as they provided her with something to draw. 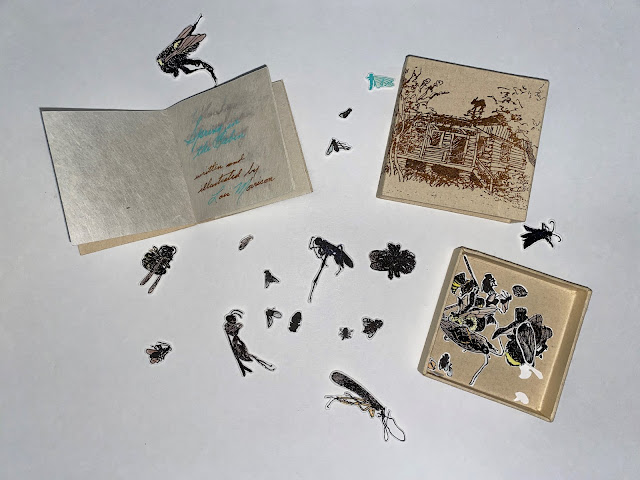 Spring in the Cabin, 1993, held in the collection of Special Collections and University Archives, UNCG 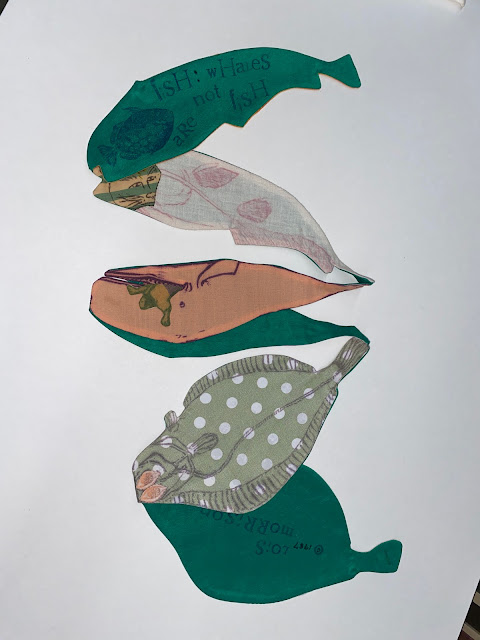 Fish: Whales are Not Fish, 1987, held in the collection of Special Collections and University Archives, UNCG 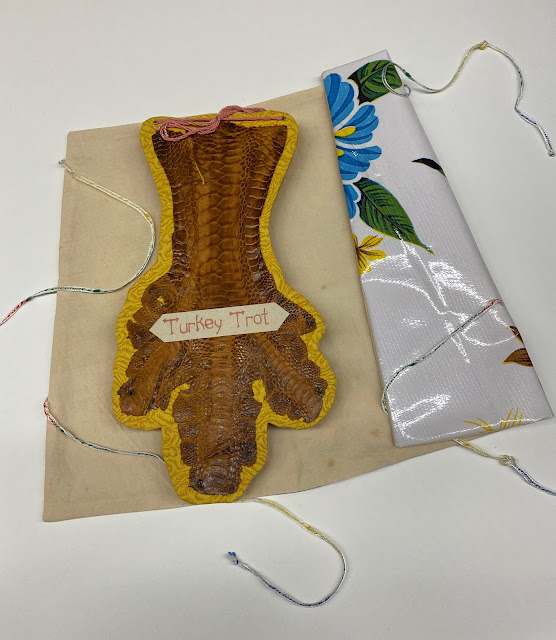 Turkey Trot, 2007, held in the collection of Special Collections and University Archives, UNCG

There are so many wonderful pieces Lois Morrison has created. UNCG is fortunate to have quite a number in our collections and too many to focus upon for this short article, but I hope that if you have not encountered her work before, you may be inspired to discover more about her by my introduction.

at 1:12 PM
Email ThisBlogThis!Share to TwitterShare to FacebookShare to Pinterest

A behind the scenes look at some of the work we do in the Preservation Services Department of Walter Clinton Jackson Library at University of North Carolina at Greensboro. The Jackson Library collection encompasses over two million items including books, reference materials, periodicals, journals, maps, documents, university archives, special collections and a beloved, elderly doughnut.